For the New Year, Resolve to Become a Rebel at Work

For a change in the new year, skip the long list of resolutions save one—commit to engaging in a bit of open, positive rebellion at work or in your career. Navigated properly, you’ll be surprised how rebelling by changing your thinking and approach(es) might just reinvigorate your spirits and add some purpose into your daily labors. And if you’re leading or managing others, a bit of the right kind of rebellion might be the motivational ticket your team members need to take performance to a new level. Of course, it pays to choose where and how to rebel carefully.

A First-Hand Lesson to Rebellion

The short story of a moment of rebellion burned into my brain took place much earlier in my career as a young marketing manager inside a global firm with roots in Japan. The conventional wisdom suggested that the nail that popped up would quickly get hammered down in this culture. For some reason, I became that nail in a moment of clarity on a business strategy suggested by those with hammer power above me. I believed their approach was flawed and provided an opening for a competitor the size of the Pacific Ocean.

In what was supposed to be a mostly ceremonial meeting with one of the highest-ranking officials in this global firm, I decided it was time to rebel.

What ensued was a heated debate over the strategy with me effectively telling this executive his team’s approach was going to fail. Ceremony flew out the window, and the argument became heated. I recall having what felt like an out-of-body experience as I looked around at the agitated group arguing with me and each other. Nonetheless, I persisted in making my case, likely tripping over the edge of appropriate behavior in this setting.

Armed with nothing more than the conviction that my approach would win the market and theirs would lose it, I fought until the meeting time expired and the visiting dignitary had to leave for his next appointment. On the way out the door, he stopped and mentioned to my boss, “That’s the first employee in a long time to tick me off. I like him.”

Ultimately, management agreed to the new strategy and my team delivered heroic performance in pulling it off successfully. The moral of the story: it pays to be right, and it’s essential to be able to deliver when you are planning to rebel!

I was fortunate not to have been hammered back into place (or dismissed) in the situation described above.

I strayed beyond the boundaries of culture and process, and to this day, I’m grateful for the open-mindedness of that executive. Unfortunately, we can’t always count on encountering an enlightened decision-maker when rebelling, so finesse is mostly advisable over the use of verbal force.

In workshops and programs, I teach the use of the tools and principles of positive persuasion as well as the need for all of us to cultivate our influence with others. Taking the time to tune into the real needs and hopes of individuals standing in our way, and then helping them achieve their ends while you achieve yours is much preferred to steam-rolling them. Of course, it also pays to choose your battles carefully. Rebellion with a higher purpose in mind is significantly more effective than just rebelling because you’re a jerk.

1. Zooming Out on the View to Helping Customers

A firm engaged in an extended game of feature and price war with a competitor up-ended the market thanks to the insights of a creative marketing manager. This marketing manager zoomed out on the business challenges of her customers and recognized her firm was uniquely positioned to solve these issues. The only problem was, they sold hardware, and her new approach required developing competence in selling and delivering services. Management initially rejected the idea. However, after gaining an executive sponsor for the initiative, she was permitted to prototype the new business model. Ultimately, it worked, and she went on to lead the transformation and success of this firm.

Attend the annual industry trade show, and the faces remain the same, it’s only the logos on the name badges that change. Here’s how one manager rebelled at this practice and helped his firm move quickly into new markets. 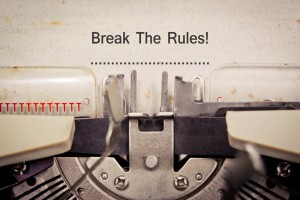 Tired of employing industry retreads, one manager decided to break the mold. Instead of hiring individuals from competitors who had product expertise, she proposed going hard after those with industry experience. They don’t know our products. Why are you wasting my time?”
After the interviews were completed, his response said it all: “I get it. I understand why you want these people for these new markets. They can learn about our products, and we could never replicate their market knowledge.”

By now, almost everyone has heard the quote attributed to Henry Ford, “If I had asked my customers what they wanted, they would have said, ‘faster horses.’ Here’s a real-life example of this in action, when a manager decided to rebel against the regular customer interviews in search of new ideas.

Instead of the regular customer sit-downs where the firm’s product managers would ask users how they might help, the rebellious manager suggested the team instead observe customers in action.

While the nature of the firm’s offerings was more back-office I.T. software, and not very exciting to observe, it proved instructive to see how information flowed into and out of the firm’s core products. It turned out; there were a series of complex and costly work-flow processes ahead of and following the input of the data into our manager’s software product.

After isolating on the pain points of preparing and then utilizing the output of their product, the manager’s team identified a blended technology and services offering customers readily adopted. The initiative ultimately led to uncovering more new opportunities and gave the firm a life-line.

1. Identify opportunities by remaining curious and constantly thinking through, “What if?” In particular, look for stale approaches that stand in the way of faster, better, stronger responses to changing market conditions.

2. Look at the assumptions behind models or approaches or standard processes in your organization. For example, I am inherently suspicious of hiring and evaluation practices and believe they are always ripe for rebellion by experimentation.

3. Practice what you preach. Surround yourself with people who are good at challenging you and challenging convention. Encourage them to help you identify needed changes and give them the support to pull it off.

4. Teach everyone around you how to reframe. A problem might be a big opportunity that merits a revolutionary approach, versus a tactic to stem the bleeding.

5. Fight for a purpose. Some people just like to argue. Successful rebellion leaders have a more significant cause in mind when they engage in battle.

6. Don’t be a martyr for rebellion. Instead, create coalitions to lead change and then make heroes out of the people who pull it off.

7. Do your homework. Your opinion might be interesting, but your conviction based on having done the legwork will gain consideration.

8. Invite those standing in your way to the party. Instead of telling someone they have to change, involve them in the process of discovering interests and designing necessary changes.

The gravitational pull of the status quo is powerful in every organization. It takes rebels and rebellion to change. While breaking the rules always comes with risk, learning to guide others through constructive rule-breaking in pursuit of needed changes is a great way to grow your success.