Chance are you don’t have to think too long or hard about the coworkers who stress you out on a daily basis. These difficult-to-deal-with colleagues come in a variety of shapes and sizes, with one of my favorites sounding a bit like comic book character: Blocker.

No, you’re not likely to see Blocker in the next Justice League movie; however, this character plays regularly in a cubicle or office near yours, standing in the way of your new idea, approach, or initiative.

While many believe the best way to navigate Blocker is through force by steamrolling, the right approach is finesse. Force breeds increased resistance, and a defender of the status quo should never be under-estimated.

Your goal with Blocker is to melt resistance and ultimately gain support or help.

The great news is you have the communication superpowers you need to engage and succeed with Blocker. For some, these superpowers are latent and in need of development and practice. With a bit of effort and forethought, however, you too can learn to leap blockers in a single bound or, better yet, gain their support for your cause.

A Primer on Your Communication Superpowers:

Humans are emotional beings, and we respond to emotional triggers. We are incredibly susceptible to persuasion tactics that seem to defy logic.

Great workplace communicators are students of human psychology who carefully and strategically wield the tools of persuasion. In my storyline, persuasion tactics are intended as positive and never to be confused with their close cousin, manipulation. While we are indeed striving to help some person change an approach or adapt their thinking, I emphasize principled negotiation. I encourage you to develop and deploy your communication superpowers in pursuit of expanding and meeting the interests of all parties and the organization.

And since your superpowers are all about manifesting finesse and thoughtful approaches to overcoming resistance or vanquishing foes, it’s important to recognize that success on a case-by-case basis takes time and diligence. Unfortunately, your communication superpowers aren’t fast-acting.

How to Recognize a Blocker in the Workplace:

The Blocker is that character at work who resists change, is often stingy with resources, and offers a firm “no” with a smile before hearing the question.

Don’t let the smile fool you!

Blockers are self-appointed defenders of the status quo, driven to forestall or derail change, resist innovation, and guard turf like a junkyard dog. Some blockers even have a delightful strain of control-freak running through their veins as well.

You’ll find Blocker typically standing squarely in the way of your new initiative or idea. Attempts to go around them are doomed to failure. Efforts to go straight at them with facts, logic, or, force, are equally doomed. Your only option is to strive to get them on your side. And for that, you need to melt resistance.

Did I mention, this isn’t easy?

A Case and 4 Powerful Tactics to Help You Melt Resistance with Blockers:

While you likely don’t have a degree in psychology, it’s imperative to learn as much as you can about your version of the blocker.

In my earlier life, I recognized the pride a blocker took in the history of his business and worked to understand the story and his role in it. While operating about six rungs below him on the organization chart, I managed to gain multiple opportunities to talk with him about his unit’s history and his career successes and challenges. The insights from those intelligence gathering excursions proved critical for the ultimate mission of gaining his support to share his product line with my distribution channel.

In the credit manager example, I introduce below, the sales representative does a masterful job of melting resistance and ultimately gaining support for a significant order.

Many blockers are great professionals who operate with a constant feeling of not being appreciated or respected. I’ve encountered this in settings with credit managers, creative experts, support professionals, IT managers and professionals and have long concluded the need for respect and appreciation are universal needs.

One of the statements I’ve used to begin melting resistance goes like this: “I imagine it’s difficult to be you in your role.”

As odd as the statement may be, it helps the individual “feel felt,” something they don’t often experience in their roles.

Use the statement and make it yours. In one instance, a sales representative used it with a challenging credit manager by offering: “I imagine it’s difficult to be you in your role with reps constantly asking for exceptions to your policies. I don’t want to be that rep.”

3, Appeal to the Blocker’s Expertise to Further Reduce Resistance

The creative sales representative described above, used the “I imagine” line to leverage another powerful tactic for melting resistance: he asked the blocker to teach him good credit habits. His words: “Help me understand how I can do a better job and do my homework ahead of time and not bring you deals that you’ll reject and grow angry with me.”

OK, it might seem like sucking up, but in my opinion, it’s just good use of the understanding of human psychology.

People want to feel felt and they want to share their expertise. Why not create conditions to let them share by asking them to teach? Also, the representative did a great job appealing to the core interest of the credit manager which is to filter out the potentially bad deals in pursuit of minimizing downstream collections problems.

4. Strategically Give Power to Blockers in Steps to Gain Support

Building on our sales representative example, after melting resistance by empathizing, showing respect, and focusing on the core interest of the credit manager, he did two more things that were brilliant with a deal he was seeking to gain support for: he let the credit manager frame the situation, and he gave her control over the conditions in which the deal would be accepted.

(Sidebar: the credit manager had a bad experience with the distributor in this situation many years ago. Circumstances had changed, and the deal met her criteria; however, she was loathe to take a chance on someone who had burned her earlier in her career.)

First, he asked: “Can we use the numbers in this deal to help me understand how it fits with your filters?”

He minimized the emotional component and focused on allowing the credit manager to apply her rules.

Next, he asked a great question and gave all of the power to the credit manager: “Under what circumstances would you consider approving this deal?”

Because the representative allowed the credit manager to define the rules and make the final call, he melted that last line of resistance and ultimately gained support.

Postscript to the Credit Manager Case

I love this example because it depicts positive persuasion in alignment with everyone’s interests. There was no manipulation involved. The credit manager’s angst over the distributor was part of her history and experience, and logic or force would have failed to move her to support. By deliberately applying the tactics of positive persuasion while focusing on mutual interests, the sales representative succeeding in doing something positive for all parties.

While you may not be in sales or be challenged to navigate those staunch defenders of your firm’s cash flow, you can use the same tactics in any number of situations. Great workplace communicators are students of human psychology, purveyors of positive persuasion tactics and relentless experimenters. Just remember to use your superpowers for good and not evil.

Get it delivered straight to your inbox!
Your information will *never* be shared or sold to a 3rd party. 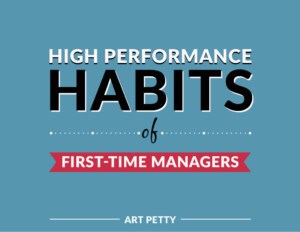 Becoming a manager for the first time is a daunting task, and so many first-time managers do not receive adequate training and support for the transition to their new role. This eBook was created to help new managers, and seasoned managers alike, study some fundamental habits of effective and respected managers and begin to incorporate them into your daily work lives.