I’m on record in my programs and various writings suggesting a “clean power” approach to cultivating influence in the workplace. There are ample opportunities to engage in the political environment in your organization without compromising your values. In my recent article on the topic at SmartBrief on Leadership, I offer three ideas you can put to work today. For this article, I’m offering some additional ideas for cultivating influence in workplace environments that aren’t exactly collegial.

A bit of background context on this topic—I grew up in my career in environments where the elbows were sharp, and people weren’t afraid to use them to get ahead. While those weren’t comfortable cultures, the firms were successful by the measures of the day. I’m stopping short of labeling these as toxic cultures, but they were indeed aggressive environments where you needed to move fast or get run over by individuals and groups trying to create the next big thing.

In hindsight, I’m glad I had an early exposure to these challenging environments. They were proving grounds for one of my first executive roles where the culture was the picture of collegiality on the outside, while behind the scenes, it was internecine warfare.

Here are some suggestions for surviving and cultivating influence using “clean power” approaches for navigating a sharp-elbowed culture.

1. Outstanding performance is essential, but it’s not enough

When individuals ask me how to get ahead in their careers, I offer as a starting point, “Succeed wildly in your current role.” This goes double in fast-moving and challenging environments. Word spreads about great performers, and there’s a halo effect that accrues to them. However, performance isn’t enough.

The people that decide who does what and what gets done need to think of you as someone to turn to with their challenges. They need to have reasons to trust your ability to take on more responsibility and make the right decisions along the way. They also need to know you are interested in doing more. It’s imperative that you advocate for yourself and that others in positions of influence—especially your boss—do the same.

While it would be nice to expect good performance to be rewarded with a steady progression of diverse experiences and roles of increasing responsibility, don’t assume it will happen, or you’re likely to be disappointed. You have competition, and you need to find ways to stand out by standing up and advocating for you.

2. Find the key influencers and make yourself useful to them

When I coach individuals on growing their influence, one of the initial steps involves mapping and ranking the influencers. It’s important to know who impacts you and your function directly. It’s then imperative to find ways to become visible and valuable to those who can choose you to do more.

In my first job out of college as a product manager, I quickly learned the most powerful person in the firm wasn’t the CEO, but rather the VP of Sales. I discovered he liked breakfast meetings, and I asked to join him to gain insights into what his team was hearing in the market about our offerings.

That first breakfast turned into a quarterly event for the next four years. We used these sessions to calibrate on market issues and product direction. It wasn’t long until I was sprinting up the ladder, ultimately leading teams of professionals significantly more experienced than I was.

While my competition might have viewed my approach as gamesmanship, I viewed it as commonsense relationship development. No backs were stabbed, and no values were violated. I was aggressive, but the focus was on the business.

Who are the individuals in your organization who can influence your success, and how can you genuinely create value for them? I counsel you to spend a considerable amount of gray-matter and time solving this dilemma. If you don’t, someone else will.

3. Kick your best people off your team and promote them across the organization

I love this counter-intuitive strategy to pushing people off your team and into other parts of the organization. Not only are you helping great performers advance in their careers, but you are also building a network where you gain support, information, and access to resources with specialized skills. That’s a triple-scoop of influence goodness, particularly in sharp-elbowed environments where loyal allies are worth their weight in platinum.

The pushback I’ve received on this is that it is done purely for political purposes and not for the organization’s benefit. I don’t see it this way.
It’s my job…and your job as a leader to find ways to develop talent and strengthen the organization’s ability to level up and succeed. Suppose you’ve followed the formula here and deliver excellent results, build strong relationships with influencers, and strengthen the firm by supplying outstanding talent. In that case, you are operating on the side of goodness. Your platinum network is a convenient byproduct of your hard work.

4. Watch out for and deal with the assassins

Some individuals are remarkably adept at manipulating people and systems to their advantage. They get what you are doing, and regardless of your approach, they view you as someone who is mucking up their ignoble plans. And, they have no qualms about using every tool at their disposal to derail your success train.

I’ve had my character disparaged, my competence questioned, and my team’s activities and many of my team members undermined at the hands of these individuals. It hurts, it’s frustrating, and if you believe in what you are doing, it demands both a defense and an offense.
A robust internal network gives you early access to information. If you’ve created value for others and helped them in their roles and careers, they are your early warning system. Knowledge is power, and when you’re in the crosshairs of someone else’s political weapon, it’s essential to know it.

While there are myriad responses to an assassin, I have approached the individuals directly and shared my observation on numerous occasions.

In one instance, it opened the door to a thaw in the relationship, and in almost all others, it momentarily neutralized them. On two occasions, the attacks escalated, and I ultimately found ways to marginalize or eliminate their roles. I was always clear both with the individuals and those in positions of power regarding the situation and my approach.

While this last scenario comes the closest to the darker side of politics I’ve had to navigate, I’m comfortable with my strong response after first attempting to build a bridge. Cultivating “clean power” means remaining transparent and focusing on the betterment of the teams and organization. It doesn’t mean you have to allow yourself to be bullied.

This topic of cultivating influence is big and important. I love the “clean power” approach because it’s how I choose to conduct myself. Many others have adopted their version of it for similar reasoning. However, not everyone plays by rules you deem fair, and not everyone has your interests at heart. If you believe in yourself and your ability to create value for your stakeholder audiences, cultivating influence is the key to your eventual success. And, it’s a full-time, full-contact activity.

Get it delivered straight to your inbox!
Your information will *never* be shared or sold to a 3rd party.
By Art Petty|2020-09-20T20:22:44-05:00September 20th, 2020|Art of Managing, Career, Emerging Leaders, Leadership, Leadership Caffeine, Leadership Power-Ups, Self-Development|0 Comments

Get it delivered straight to your inbox!
Your information will *never* be shared or sold to a 3rd party. 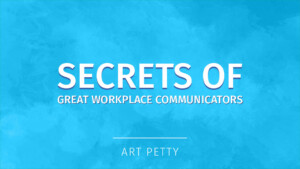 Great workplace communicators understand growth occurs by focusing on continuous improvement. This resource reveals the secrets you need to boost your success in a management or leadership position.